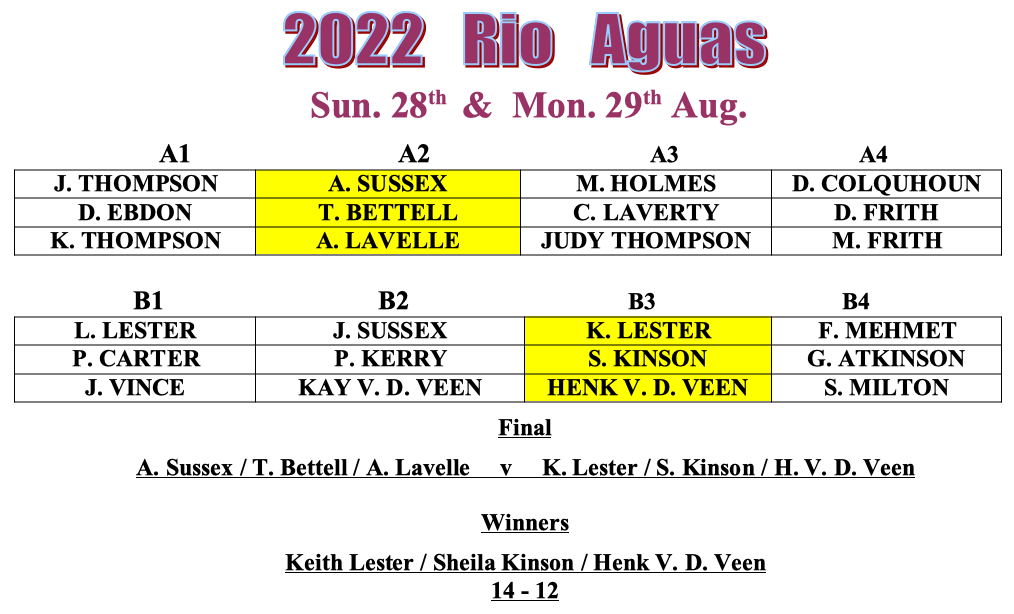 All games will be played in line with the laws of the sport of bowls.

This is a round robin competition.

The competition comprises of two groups of six teams.

Two trial ends before the start of each rinks match.

Teams of three will be drawn as near as possible from the 4 handicap pools listed below:

Skips may visit the head.

If an end is "killed" and the jack goes out of the rink of play, then the jack will be re-spotted on the crosses either side of the tee.

Each member of the team will play in two sessions of each match.  Team skips will decide each player's position for all disciplines.  It is permissible to change the order of players during the course of the competition.

The scorecard in each match is continual for all three disciplines.  Cards must be handed in to control after each match.

The winners of group A and group B will contest the final.

The final will be played in exactly the same format as the group stages.  The winner will be the team with the most overall shots.  If the final is drawn then the full rinks team will play a sudden death extra end.

Morning play will commence at 10.00 am and the afternoon play at 1.30 pm.  "No Show" or late arrival (15 minutes) then 4 points and 8 shots will be awarded to the opposition.

If any team pulls out once the tournament has begun, then all points scored for/against that team will be cancelled.