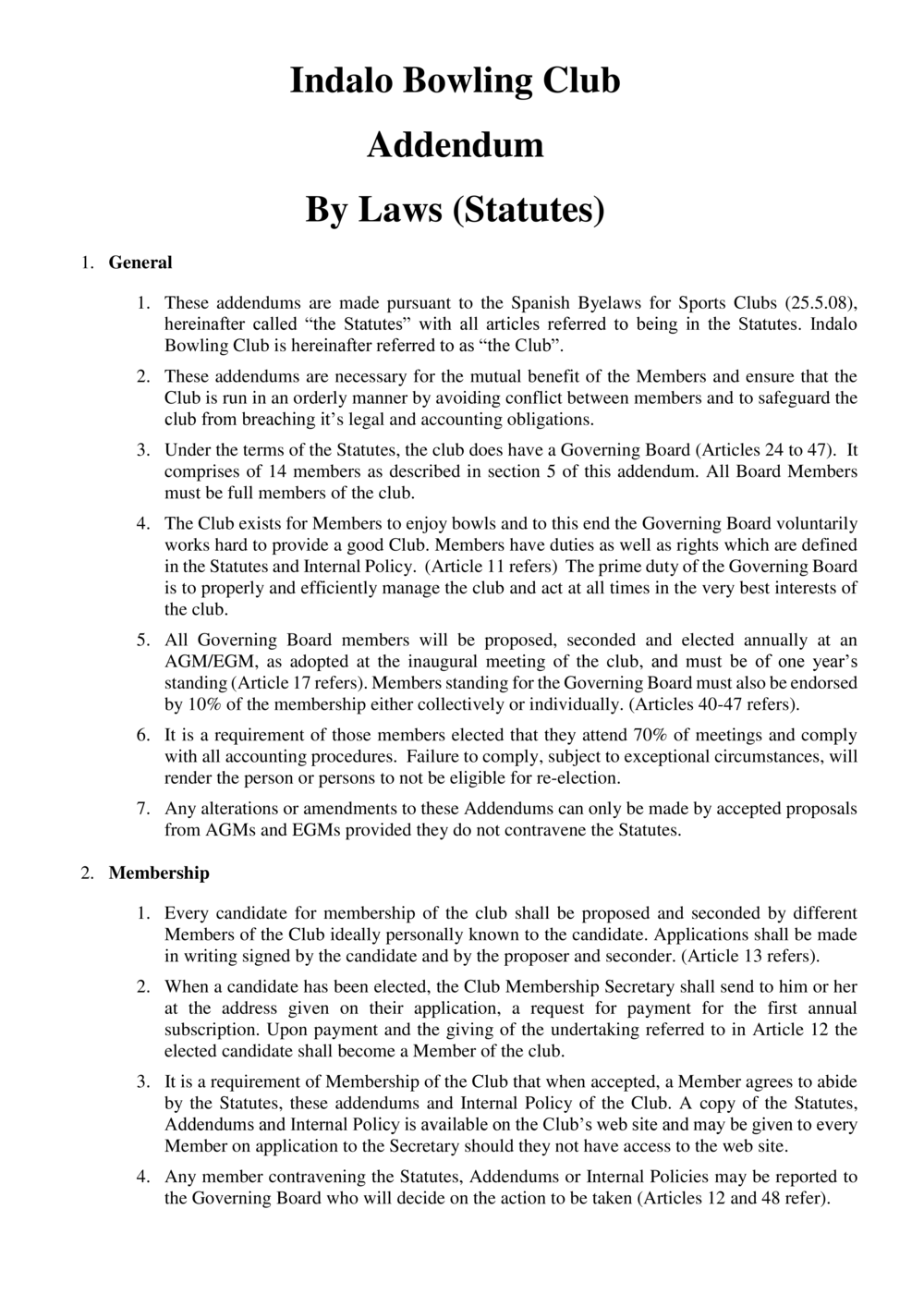 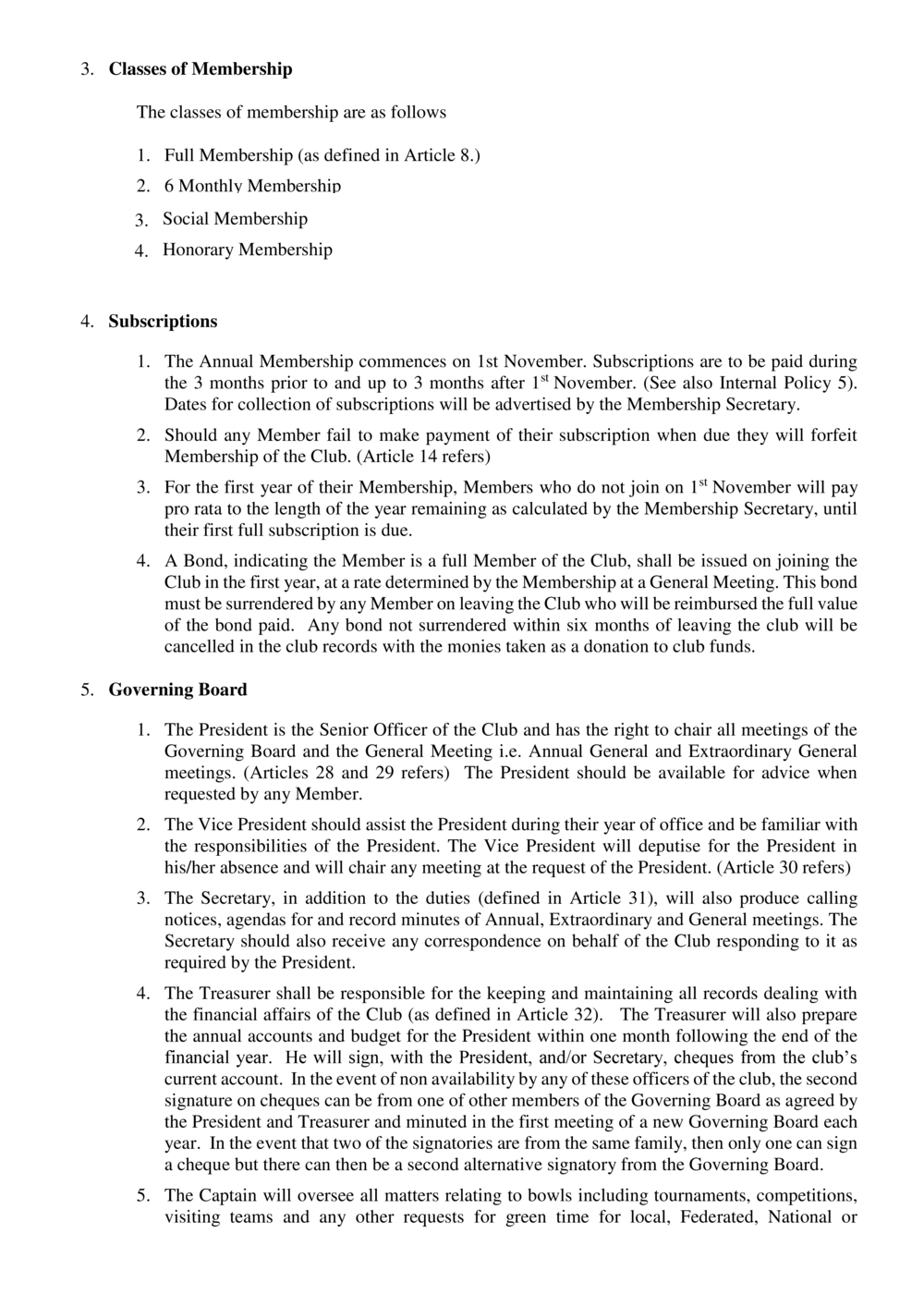 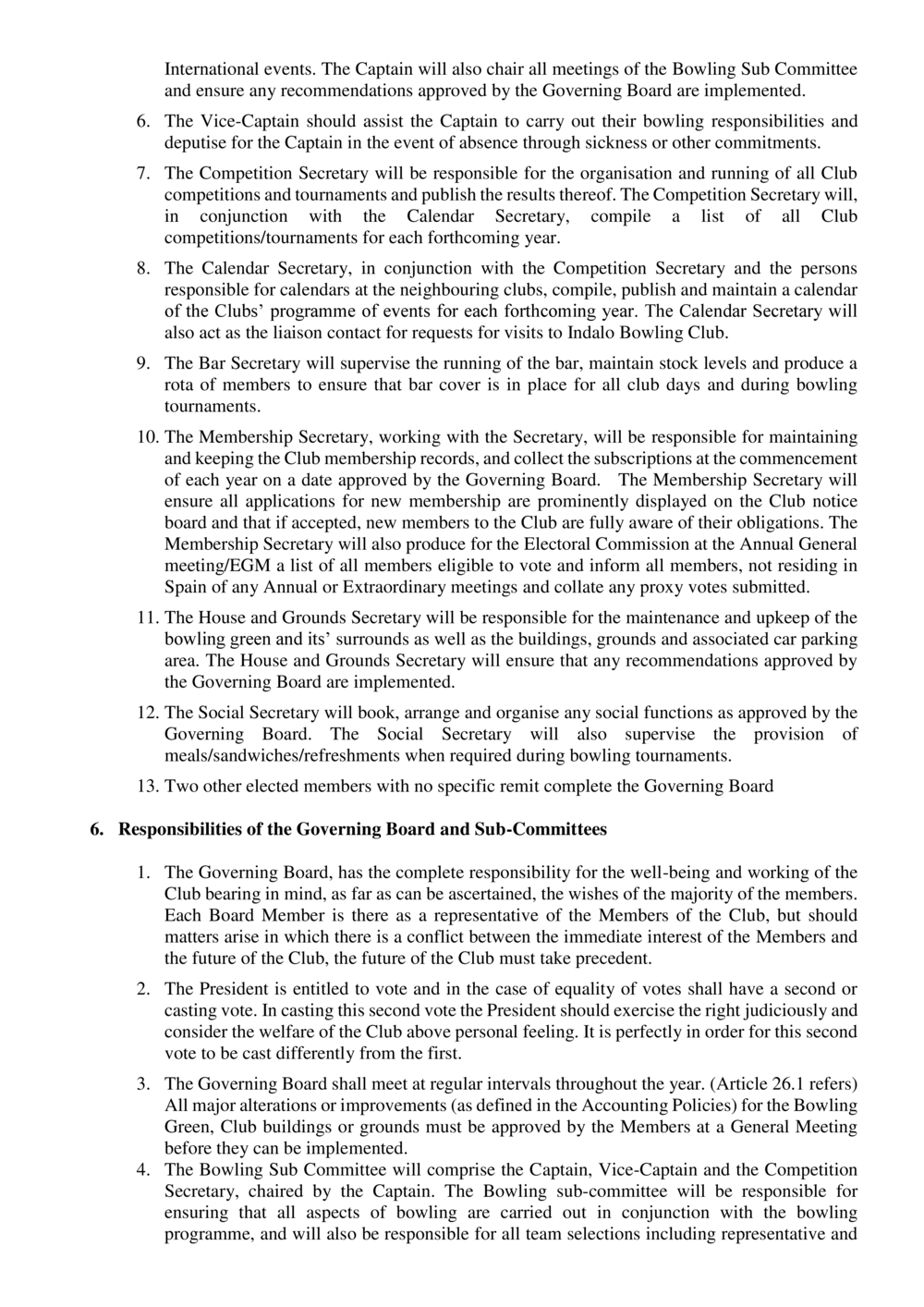 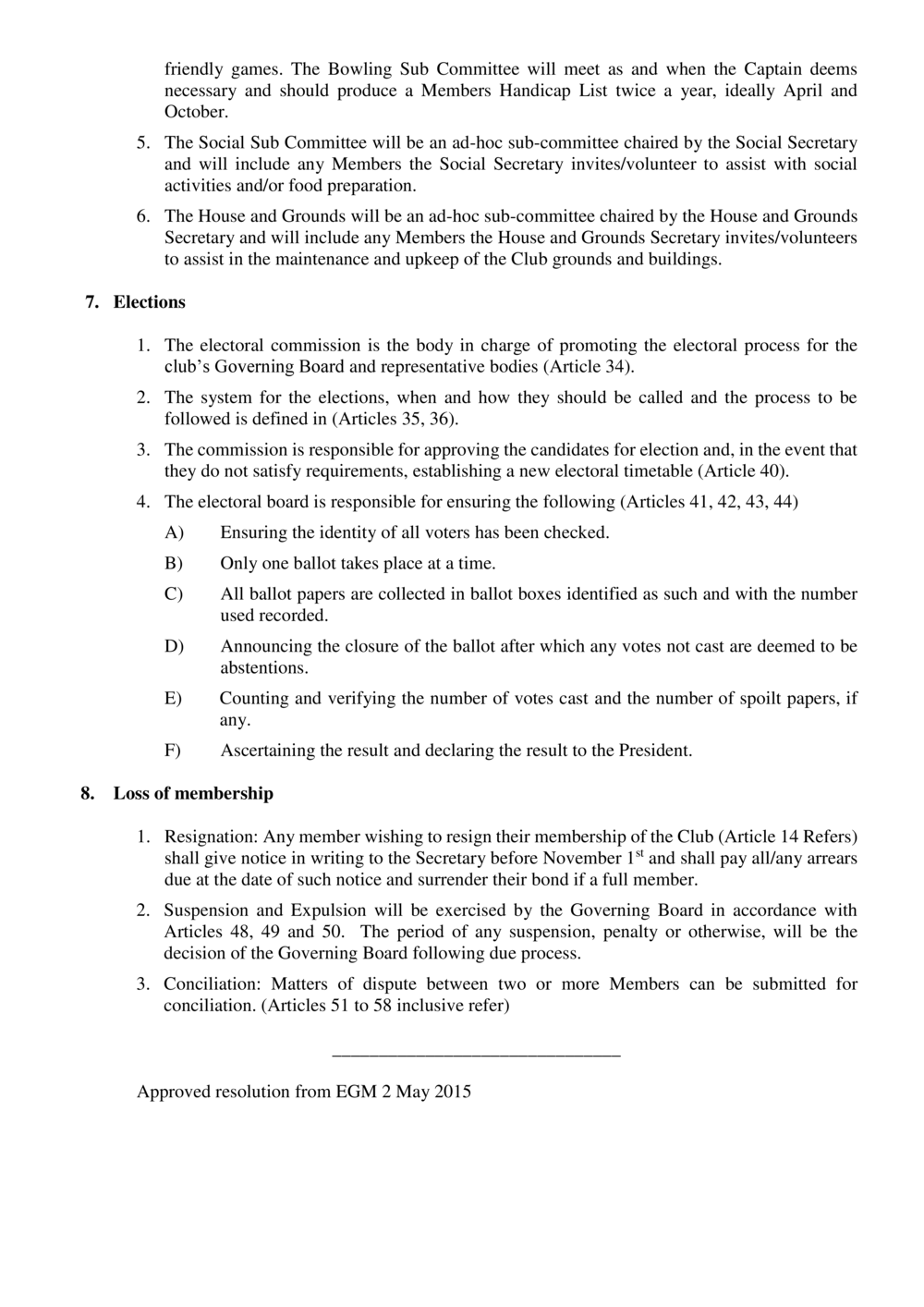 Additions approved by the membership.

That future committees be authorised to spending to 5,000 euros for Financial Year without having to call an EGM – Approved

This meeting supports the proposals for the realignment, fencing in and car parking area as per plans – Approved

It was also agreed that 10 per cent could be added to the total costs for unforeseen expenses.

This meeting supports the building of first, a new club house and terrace, second the building of a new kitchen and third, the adaptation of the old club house to update the toilets and create changing rooms – as money becomes available as per plans – Approved.

This meeting accepts the adoption of the Indalo Bowling Club Addendum By Las (Statutes) – Approved.

That the club members approve the new shirts as the designated club shirts and authorise the purchase of the new stock for sale – Approved.

That the members confirm the decision of the committee to spend a further 3000 euros for the upgrading of the electrical system – Approved.

The proposal to the membership is that the club will from the 1st July 2016 take on the registering and payment for all club bowling members for their FAB licence regardless of whether they are 3, 6 or 12 month members. There will be no alteration to the club membership fees. A condition of membership will now include the requirement to permit the club to register you with the FA on your behalf.

The FAB has allowed for this year only, new members, from the end of June, to enrol for €7.50 for the half year. A large number of our members have already paid the full €15.00 annual subscription as well as competed in some FAB competitions.    It is further proposed that they be refunded €7.50 each as soon as is reasonably possible – Approved

The committee proposes that a flexible repayment loan to a maximum of 50,000 (Fifty thousand) euros payable over five years be obtained from the bank for the purpose of providing the balance of monies required to build a new Clubhouse within a maximum overall cost of 100,000 euros (One hundred thousand) – Approved.

At an EGM on the 12 September 2007, authority was given by club members to obtain full planning permission to build a clubhouse in the north east corner.  A licence was granted on the 12 May 2008 and fees paid of €6413.

At the AGM 12 February 2010 the then committee made a proposal to continue with the outstanding planning permission for the new club house  The minutes show that this was passed unanimously.

At an EGM on 3 March 2012, further unanimous approval was given to build a bar and bar store, this to be the first phase of the overall build. A lintel was installed in the end wall to enable a simple connection to the new club house to be built in the second phase.

Your present committee are proposing that as funds to build the new Clubhouse (retaining the Toldos in their present position) will be available provided agreement to have a bank loan is approved by members and as planning permission to build is already held, that the work is commenced, without further delay, at a total cost of 100,000 Euros (One hundred thousand) tin accordance with the plans on display in the clubhouse - Approved

As an alternative to the club financing the new clubhouse through bank borrowings, the Governing Board proposes that the following be put into place either in whole or in part according to the number of subscribers.

Since our borrowing requirement has been reduced to €40000, the club will make available 40 *€1000 bonds that can be taken up by members on the basis that repayment will be made by an annual ballot of 8 bonds per year. In return those members will receive a €20 reduction for each bond held in their subscriptions for a five year period regardless of when they actually receive repayment of their bond.  The maximum holding will be restricted to 10 bonds. In the event that more then 40 bonds are applied for, those applying for the most will have their application reduced.

The benefit to the club will be that the effective cost of this scheme would be to reduce the borrowing cost to €4000 over the five year term. This would represent a saving of approximately €4000 interest.

Any bond holder leaving the club will be entitled to repayment of their bond at the end of the financial year. The Governing Board will at their discretion reduce the number of bonds in the annual ballot by the same. However, in the event that more than 8 bonds are required to be repaid, repayment will be made pro rata and the balance held over to the end of the following year. - Approved

The Governing Board requests club members’ endorsement to their proposal to replace the carpet and underlay, after the building of the new club house has been completed, by purchase from Greengauge in the sum of £43,320 Stirling including VAT, delivery and fitting.  The monies to come from the carpet sinking fund as previously agreed at a general meeting of members. - Approved

The Governing Board proposes that the fee for Social Membership be reduced to €5 being the cost of the required FAB insurance cover. - Approved

The Governing Board requests your endorsement to their unanimous decision at their meeting in April 2016 to award Charlie Alman, a founder member, Honorary Membership - Approved

Proposal 5 - From Alan Henshaw, seconded by Keith Harvey and supported by eleven members.

That sanctions be imposed on club members who do not carry out their bar duty when informed of the date by the bar Secretary. I would like it to be agreed by the club members that those defaulting receive a letter from the Governing Board stating that it is a requirement of all club members to undertake their turn at bar duty while they are a member of the club. Should they default a second time, they will be suspended from all bowling activity for a period of one month on each subsequent occasion they default. This ruling to come into effect from 1st March 2017. - Approved

Proposal 1 - From the Governing Board

That a new category of Membership be created entitled “Full Non Playing Member” with an annual fee of one hundred euros. Membership under this category is only open to current full members who have been full members for a minimum of five years and hold a club bond. Such members would have full voting rights and be eligible to hold office on the Governing Board. - Approved

Proposal 2 – Proposed by Andy Cooper and seconded by Doug Frith

That the Top Team Trophy won by a team from Indalo at Potters in March 2017 along with the accompanying photo given by Potters be displayed in Indalo House in perpetuity. - Approved

The Governing Board propose Addendum 1.6 be changed from requiring GB members to attend 70% of meetings to read:

It is a requirement of those members elected that they miss no more than two meetings in their year of office and comply with all accounting procedures. Failure to comply, subject to exceptional circumstances, will render the person or persons to not be eligible for re-election the following year. - Approved